The McHenry Garden Club awards Scholarships  to High School graduating seniors and students currently enrolled in a college or university. This program is supported by our annual spring “Container Garden Gala” and winter “Holiday Floral Show.”

Guidelines for Scholarships
Primary consideration will be given to applicants pursuing study in ecological fields such as landscape architecture, horticulture, botany, forestry, agriculture, or environmental science.

The scholarship funds must be applied to tuition, fees and course materials, and funds will be dispersed to the college or university upon completion of the first semester and registration for the second semester.

Applicants must have a minimum 3.0 grade point average, be a legal citizen, reside in the School District of McHenry and have graduated or be enrolled in their final year of high school.

A completed scholarship application, school transcripts and a letter of recommendation from a teacher, counselor, or member of the school administration must be submitted by April 1st, 2022.   Each candidate may be interviewed by garden club committee members. 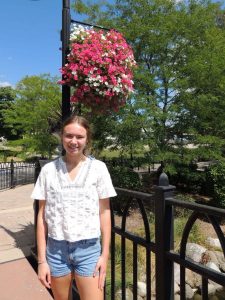 2020 – McHenry East High School senior Taylor Stebbins was a 2020 recipient of a $1000 scholarship from the McHenry Garden Club.  Taylor will be attending Western Michigan University in Kalamazoo, Michigan.  She will be majoring in Environmental Sustainability with a minor in Business Strategy. 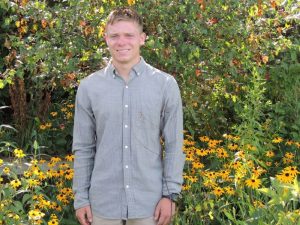 2020 – The McHenry Garden Club awarded a $2000 scholarship to McHenry East High School senior Jake Letmanskii.  Jake will be attending Iowa State University in Ames, Iowa, and will be studying both Agronomy and Horticulture.  He plans a future career in plant breeding, either new varieties of crops or ornamental plants. 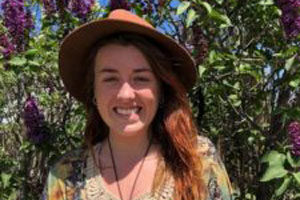 2018 – The McHenry Garden Club has awarded a $2000 scholarship to Katelynn McManus, who is a rising college senior and is currently studying Geography and International Relations with a minor in Sustainability at the University of Denver.  Katelynn is a graduate of McHenry East High School.  She recently spent a quarter studying and working in Bolivia.  Her future plans include getting a PHD in Political Ecology so that she ca do research that will aid developing countries in providing sustainable resources such as food and water. 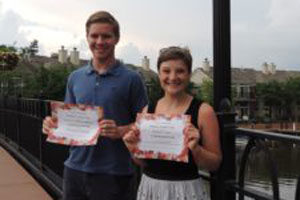 2017 – Two McHenry seniors were awarded scholarships totaling $3,000.00.  Marjean Cone, a McHenry High School West Campus graduate will receive $1,000.00 toward her study of geology at the University of Illinois, with a future interest in paleontology.  Collin Kwasigrogh, a Marion Central graduate will receive $2,000.00 toward his study of environmental engineering at Marquette University.  We are proud of these inspiring graduates who are deeply concerned about the health and preservation of our environment. 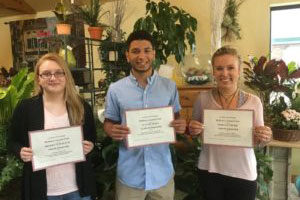 2016 – Our scholarships were awarded to the following from left to right.  A $500 winner is Brooke Weltch from McHenry West High School.  She will attend Carthage College in Kenosha, WI.  She plans to major in Classical Archeology with emphasis on ancient civilizations and their impact on the environment.  Our $1500 winner is Ivan DeJesus from McHenry East High School who will attend Appalachian State University in Boone, NC.  His major course of study will be Environmental Sciences.  Another $500 winner is Morgan Rudd from McHenry East High School.  Morgan will attend McHenry County College in Crystal Lake, IL.  Her major will be in the area of Horticulture and Landscape Design.  We are extremely proud of all of our winners! 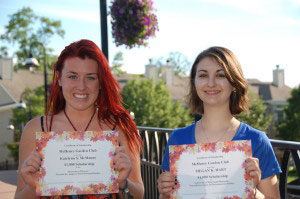 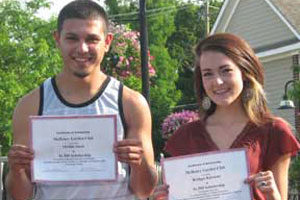 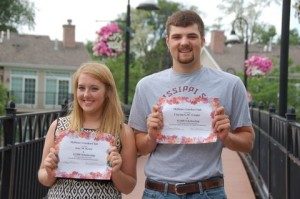 2013 – Amy M. Kruse, a graduate of West Campus, will be attending Kansas State University and her $2,000 award will go towards her major in Agricultural Economics. Clayton G.W. Cooper, graduate of East Campus, will be attending Mississippi State University and his $1,000 award will go towards his major in Forestry and Wildlife Management. It was an honor to present this award to these wonderful and inspiring graduates. 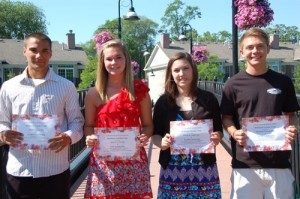 2011 – Samantha Anderson, from McHenry High School West Campus, will be studying the field of Bio Chemistry in Plant Study at the DePauw University located in Greencastle Indiana.

2010 – Amy McReynolds is a McHenry High School West Campus Graduate, Amy E. McReynolds, daughter of Scott and Mary McReynolds, is the McHenry Garden Club’s 2010 Scholarship recipient. Amy will be attending Southern Illinois University at Carbondale where she will be attending the College of Horticulture to major in Plant and Soil Science.

2009 – Dan Cross is a May 2009 Graduate of McHenry West HS attending McHenry County College. He enjoys wresting and football and has been active in Business Professionals of America, the talent show, pep rallies and Youth Commission/PADS. Dan’s family is part of the horticulture community. His mother is a landscape designer working as a wholesale plant manager at a local nursery. His brother works at another nursery. Dan states that his family has always been interested in plants. Dan plans to take more courses to decide his area of interest and says “I enjoy giving back to my community”.

2009 – Angelia Goblin, a 2009 McHenry West Campus graduate, intends to major in Environmental Science and is currently attending MCC. Her future plans are to attend the University of California, Berkeley. Her strong passion is in preserving and cleaning the worlds ecosystems in order to provide safe and beautiful places for humans and animals to live in. Besides being active in the school’s Environmental Club she was active in other student and community activities.

2008 – Meagan Grahm, daughter of Frank and Maureen Grahm, was the 2008 recipient of the McHenry Garden Clubs $500 scholarship. Megan, a graduate of McHenry High School West Campus won the award for her excellent grades and volunteer work in the community. She plans to attend Western Illinois University.